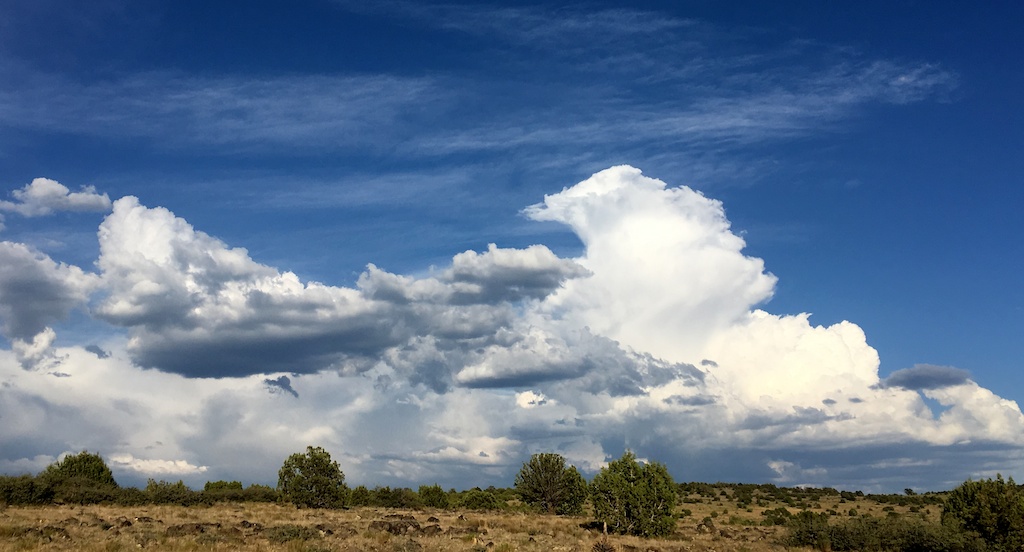 This photo got picked today for Flickr explore rather mind boggling for an iPhone pic sitting among so many stunning photos. The magic of explore is you cannot expect it, I thought maybe something was up when it showed 20 favorites this morning from people I do not know.

And then shortly after I got a notification it was added to the In Explore flickr group, as confirmation: 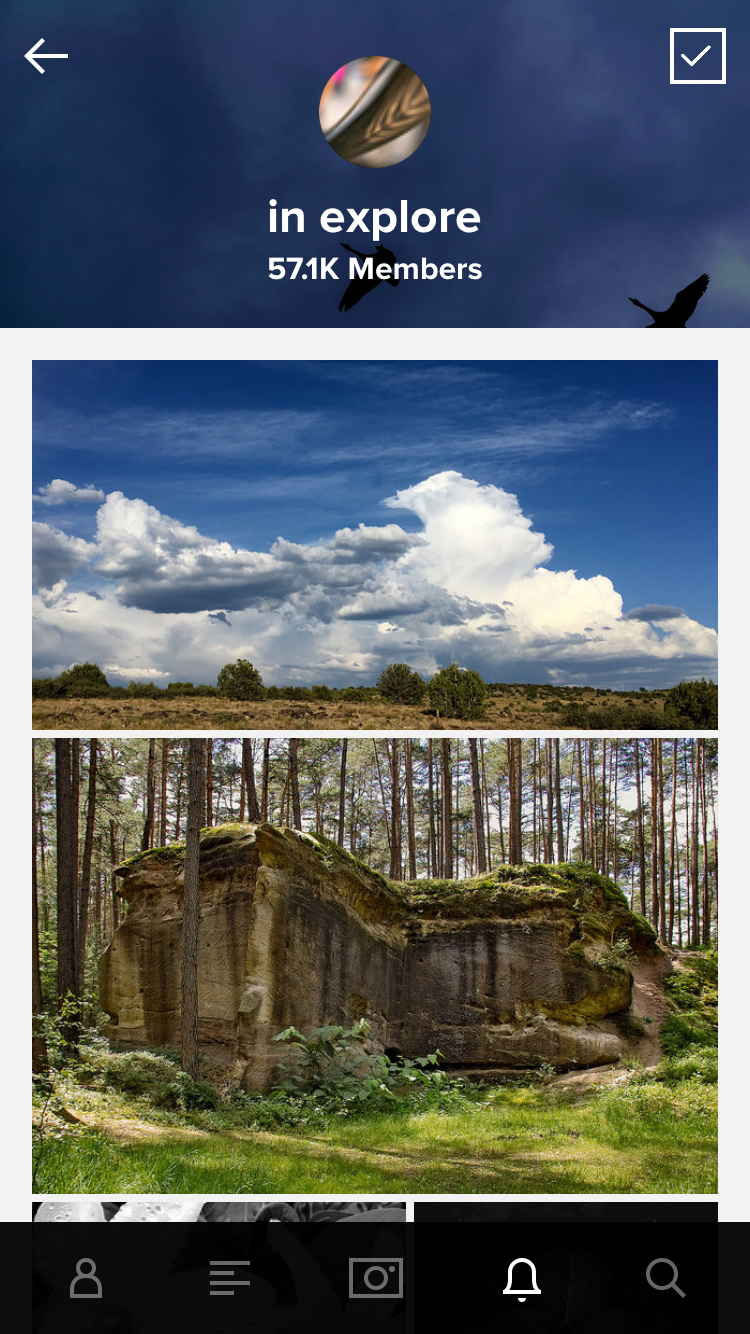 The photo sitting shortly atop the flickr In Explore group, screenshot on the same device that took the picture.

As mentioned in the photo info below, on a late afternoon drive home from Flagstaff via Camp Verde, I was taking in the dramatic sky as the summer thunderstorms were moving across the top of the Mogollon Rim. I thought I might get a sky shot before I started up the hill, like at the turn for the road to Fossil Creek Canyon, but the sweeping view was not at that point. So I headed up the hill, listening to music but eyeballing the sky ahead (and of course watching the road). As it wound through a narrower stretch of rock, I spotted the bright white column of a thunderhead climbing, and so I made the choice to pull off and try to find a vantage point.

I had some fun with a deer skull I found on the ground, balancing it on the branch of a small juniper: 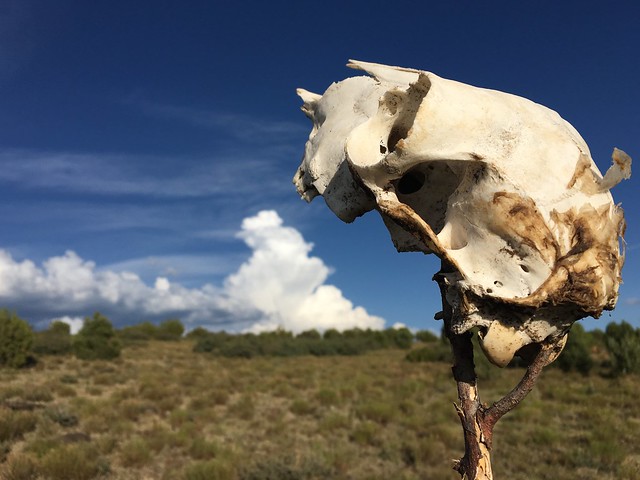 By the time I got to the vantage point, I doubted the photo was as good as I had hoped, but took two shots just the same. The original had quite a bit more sky, and cropping it wide (turning off the proportions of the original) at least enhanced the width of the clouds. I cut some of the ground out too, to emphasize the sky.

I thought it was a pretty good photo, enough to choose it as my photo of the day, but not super good. You never know.

I had been mulling a post about photography with the iPhone. I am so dedicated to most of my work with the Canon 7D and my nifty fifty f/1.4 lens. The iPhone cannot match it for sharpness nor what I can do by managing aperture / depth of field. It’s not even close. I’ve taken some photos with both devices, and the colors from the iPhone are usually not as crisp and vibrant. And with my previous iPhones (4,5, and now a 6) I felt the camera was quite inferior. The 6, though has come a long way, and now I am enjoying using it as my camera while dog walking.

It’s a different kind of challenge, knowing what it can or cannot do, but a good one. By getting super close to a foreground subject, locking the focus/exposure, you can force somewhat of a shallow depth of field. It excels too at being able to place it at low, high angles that would be tough to do with the big gun. But mostly, its the same exercise of looking at subtle details of small objects, or special light, that makes photography my favorite thing to do. 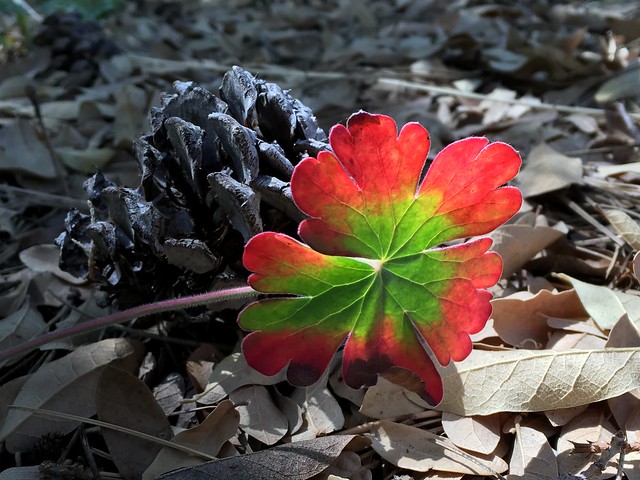 This photo was also selected for In Explore about 2 months ago, and it too was taken with the iPhone. I spotted the colors a small plant I still do not know, but the way it was lit by the morning sun almost called to me. I noticed it, and almost passed it by, but getting down closer to the ground showed me that the light was stunning. I admit I moved the burned pine cone behind it, partly to prop it up a bit, but it also added an interesting textual contrast.

I will still reach first for the DSLR, but since getting the iPhone 6 in December, I am finding it is enabling me to do more photos I would have previously discounted as possible. It’s not about one camera being superior, it’s about figuring out what you can do creatively with the one you have. I like them both.

If you really want to appreciate what an iPhone photographer can do, follow Dave Caleb on Instagram. Dave, a photographer teacher at a school in Singapore I got to meet when I was there in 2013, does stunning stuff with an iPhone 5, macro lens, and assorted editing apps. He’s got a fantastic eye for detail and light.

#Silhouettes of #SUP #surfers in #Tofino #BC. #iphone5s & #snapseed

Ready for #takeoff. Eye to eye with this little guy. #CloseUp #macro image captured on an #iphone5s and #21x #olloclip